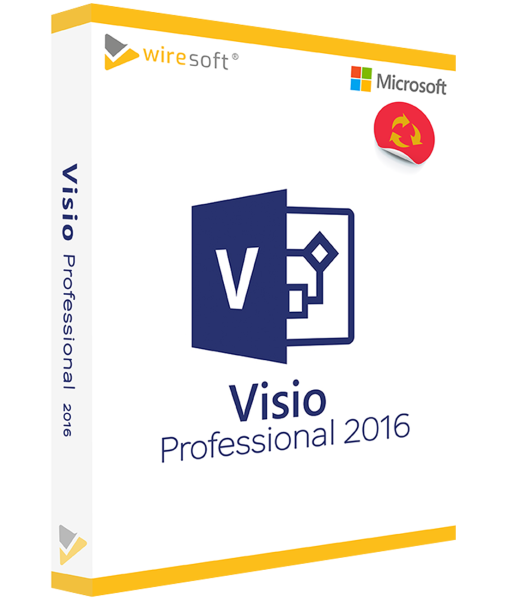 With Visio Professional 2016, users have the maximum number of tools and templates at their disposal to professionally create differentiated diagrams for a wide range of business, technical or scientific areas - wherever plans, drawings and illustrations facilitate the understanding of complex structures, processes and facts in particular.

For this purpose, Visio Professional 2016 not only provides a wide range of the most diverse diagram types, including enhancements, but also additional templates and styles, these are also clearly organized in topic areas with so-called shapes in a construction kit through the sensible subdivision into templates, in order to provide ready-made elements depending on the area of application, which can only be filled with the current data and, if required, also adapted or changed according to one's own ideas. Especially for the creation of business and technical as well as process diagrams - and especially also network, software and database diagrams - Visio Professional 2016 has many additional templates (including BPMN 2.0 - abbreviation for Business Process Model and Notation) as well as additional floor plans and maps.

Users who use the Microsoft cloud service OneDrive can also share files created with Visio Professional 2016 online with others and even make them available for team collaboration, the diagrams created can be linked to the underlying data to always provide the "current version of truth" ("one version of truth"), as the data contained is automatically updated here. Similarly, the DataVisualizer can be used to import data from another source directly into a chart.

As of Windows 8, users can also use Visio Professional 2016 on a touch-enabled device and operate the software with either a stylus or finger to draw or add text.

Which users is the Visio Professional 2016 edition intended for?

Thanks to its broad portfolio of shapes and tools, the Professional Edition of MS Visio 2016 offers the best prerequisites for being used by demanding users - whether in companies, organizations or even self-employed persons - for the professional creation of precise, complex visualizations that also take into account applicable norms and technical standards in particular.

The single license of the Professional Edition of Microsoft Visio 2016 is available in the Wiresoft Software Shop as a purchase version in the form of so-called used software, which originates from a previous volume license. This means that the price is significantly lower than for new software and there is no subscription obligation, as is often the case for such editions. With a single license from Wiresoft for Microsoft programs, buyers take advantage of the economic benefits of used software to use this professional visualization software at a reasonable price. In addition, the compatibility of Visio Pro 2016 with Windows 7 makes this version attractive especially for the circle of users who still use this operating system, so that they do not need an (expensive) update of the existing programs to use Visio 2016.

In addition to Visio Professional 2016, there are many other Microsoft Windows individual programs or software packages compatible with this edition, as well as operating systems, available in the Wiresoft Software Online Shop as low-priced Used Software individual licenses. The following overview presents the most important features as well as the innovations of the Visio Professional 2016 edition.

Exclusive features and functions of the Visio Professional 2016 Edition

The Visio Professional 2016 Edition offers more options in many areas for creating diagrams and also sharing them with others. These include the following exclusive features:

Diagramming according to the latest standards

Integrated in MS Visio Professional 2016 for many templates are various industry standards and notations, so that the diagrams created with them meet their standards and can thus also contain binding statements. In addition, many Visio shapes offer the option of being linked to individual indicators and metadata, which are then automatically updated in the diagram.

Creating diagrams automatically with the DataVisualizer

The DataVisualizer add-in is available exclusively in the Visio Professional 2016 edition to create diagrams automatically by linking to an external data source such as Excel. The feature can be used for standard flowcharts - Simple Flowcharts - as well as horizontal or vertical cross-functional flowcharts - Cross-Functional Flowcharts. By synchronizing the data in real time, changes in the chart (as well as in the data source) can be made visible immediately, which is especially important in process management.

By linking the shapes of a diagram with real-time data and making it available online via the Microsoft cloud service OneDrive, other users can not only edit it via a browser, they can also be confident that the so-called "current version of truth" of this diagram is available to them, as the linked data it contains is automatically updated.

The Professional Edition of Visio 2016 also supports the import of DWG files (up to DWG 2010) - the industry standard for exchanging CAD data - from AutoCAD. This makes .dwg files available to users for further use in Visio, e.g. on the basis of building floor plans, in order to use this information for space planning, e.g. for offices or industrial plants.

The diagrams created in Visio can be saved again as AutoCAD files or also in the common image file formats .jpeg, .png or .xml as well as PDF.

In addition, Visio Professional 2016 also uses the VSDX and VSDM file formats, which are based on the Microsoft Standard OPC (Open Packaging Conventions) for compressing files in ZIP format.

Other features in Visio 2016 Professional

Users can access a number of other handy features in Professional as well as the other editions of Visio 2016 that make the program easier to use and therefore more efficient:

Current functions are also available in the Professional Edition of MS Visio 2016, as they are also integrated in the corresponding Office Version are integrated:

The "Starter Diagrams" are an efficient support in Visio to create a diagram faster. These provide ready-filled diagrams, which the user can then complete or adapt by entering their own data based on understandable step-by-step instructions. For Visio Professional 2016, starter diagrams are available especially for flowcharts - so-called "Swimlane diagrams".

Visio Professional 2016 also supports users with helpful tips and functionalities when creating diagrams: For example, the automatic alignment and positioning of shapes, which are particularly easily incorporated into a diagram via drag & drop, ensures a clear appearance.

In general, the compatibility of Visio 2016 with other Office programs has been significantly improved: Visio files can now be used in other document types without any problems, for example as graphics in a PowerPoint presentation.

The broad portfolio of Professional diagrams available in Visio Professional 2016, with 70 templates and over 600 common shapes as well as another 400 intelligent shapes, makes it even easier to visualize a wide variety of structures, systems and processes. For uncomplicated use of this wide range of possibilities, as well as for better orientation when finding the appropriate diagram template, all types are clearly assigned to different templates, which contain the matching shapes, many of which also correspond to typical industry standards, including:

In addition, Visio Professional 2016 allows users to use the existing shapes to customize them; including using various tools to format text, change the style of lines, and fill areas with colors, patterns, etc. They can then be saved to the Favorites template for reuse.

Microsoft Visio Professional 2016 is available in a 32-bit as well as a 64-bit version - depending on this, further different requirements apply, e.g. for the main memory. When using Windows 8 as the operating system, Visio 2016 supports multi-touch displays, making the software suitable for mobile use on corresponding iOS or Android end devices. For cloud-based management of Visio files, connection to MS OneDrive is required.

The Professional Edition of Visio 2016 is offered by Wiresoft in the online shop in the form of a single-user license as a used software - thus its price is significantly lower than that of comparable new goods, whereas here in the usual trade often only the latest software version of Visio is available. In addition to the lower price, a purchase version of Visio 2016 offers the great economic advantage that it can be used for an unlimited period of time, because this is not the subscription version with the typical contractual obligations.

This available single-user license of MS Visio 2016 Professional Edition was part of a previous volume license of the program of the same name from Microsoft, with the difference that it was purchased and possibly used by a company. When it was resold to Wiresoft, the volume license was converted into individual licenses; as a result, this was marked as used software or "Used Software". However, neither this conversion to single user licenses nor this labeling of Visio Professional 2016 Edition as used software results in any restrictions with regard to its usability or scope of functions - not only because software cannot be subject to wear and tear, but also because the splitting and resale do not constitute a violation of valid legal provisions: The licenses offered as used software at Wiresoft - such as these of Microsoft Visio 2016 Professional Edition - come exclusively from companies located in Europe. Therefore, the underlying business transactions are also governed by the case law valid in the EU; this clearly states that the trade in used software is legally permitted. This has also been confirmed several times by various court rulings, so a liability risk for you as a buyer is reliably excluded. Furthermore, the software you have purchased is also audit-proof due to complete proof of all previous buyers or sellers on the part of Wiresoft.

Your software purchase through Wiresoft is always a safe business, which has only advantages for you! With every purchase of a license such as MS Visio 2016 Professional in the Wiresoft Shop, you benefit not only from the price advantage over comparable new goods, but also from the security of the immediate download after the payment process is completed, including the immediate activation of your license with the valid volume license key.

Thus, the purchase of used software licenses such as for Visio Professional 2016 Edition or to another Microsoft program also offers you the opportunity to use such exclusive program editions without restrictions.

In the Wiresoft Shop for Microsoft used software, you will not only find other Visio editions or versions in addition to MS Visio Professional 2016 Edition, but also many other Microsoft programs that are compatible with it, such as Windows operating and server operating systems, and so on. If you have any questions about MS Visio Professional 2016 or any other Microsoft software in Wiresoft Softwareshop, just contact us and ask for our friendly and competent customer support - via chat, phone or e-mail.