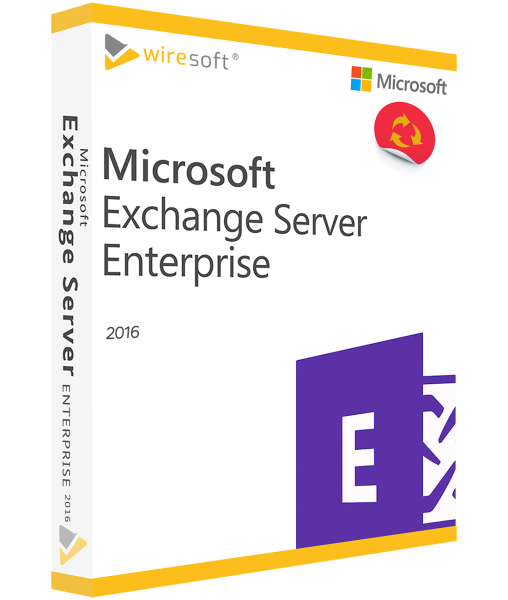 Windows Server 2016 is a proven messaging platform for centralized management of emails and contacts as well as appointments and tasks and the server version of Windows 10. Especially larger companies and institutions thus benefit from the high scalability as well as from many practical features for flexible, even locally independent use, which supports team collaboration and improves security.

As a powerful communication system, Exchange Server 2016 is an important component of every modern company for controlling and managing typical work processes. The server software acts as an internal as well as external interface, reliably connects employees as well as departments even across locations and comprehensively contributes to increasing the overall effectiveness in companies: e-mails, contacts and appointments can be centrally managed and clearly archived and searched. Differentiated rights management defines the individual access of employees to data and appointments, so that Microsoft Exchange Server 2016 offers maximum control and transparency.

Optimization of the server architecture reduces the number of server roles in Exchange Server 2016 Enterprise to two - mailbox and edge transport - and also simplifies scaling and improves support for cloud services.

The Enterprise edition of Exchange Server 2016 is particularly suitable for communications of large companies or organizations with many employees, as it supports up to 100 mailbox databases per server.

Wiresoft offers the Enterprise Edition of Exchange Server 2016 as used software - at a lower, reduced price compared to new software - if still offered. Used software is therefore especially attractive for those large companies and organizations that are looking for a cost-saving, economical way to use just more powerful software like Exchange 2016 Enterprise in their operations. Because even as used software, this Exchange Edition offers the typical maximum in terms of scalability, performance and security, since it can be used in its entirety.

Other Microsoft Exchange Server 2016 benefits at a glance

The 2016 release of Windows Server includes a number of important new features as well as enhancements to existing functionality. Primary among these is the optimization of the server architecture by reducing the number of server roles to two: mailbox and edge transport - more on that below. In addition, scaling has been simplified and cloud services support has been further enhanced. Other features include:

The eDiscovery search architecture has been revamped in Exchange Server 2016 to work asynchronously as well as remotely, leveraging multiple servers to make searches much faster. When entering a search term in Outlook 2016 or Outlook on the Web, suggestions appear based on the most frequently used contacts, emails in the mailbox, and previous searches. Further, contextual filters - e.g. for the date range and related senders - help to find specific information more easily. With Outlook on the Web, it is possible to search both your own and other people's calendars.

Collaboration in the cloud

In Outlook 2016 or Outlook on the Web, files that have been saved in OneDrive for Business or SharePoint 2016 can be included in an e-mail as a link, instead of as a file attachment as before. The recipient in question can open the linked file directly on their PC, just like an attachment. Access rights can be customized and automatically activated.

Exchange Server 2016 supports hybrid scenarios - here it makes no difference whether the mailbox is located on a local server or in the cloud. Local mailboxes can also be used with the cloud extensions Exchange Online Archiving and Azure Rights Management.

Data Loss Prevention (DLP), a transport rules extension, improves the security of data in Exchange Server 2016 and helps protect it from unauthorized access. The methods available in Data Loss Prevention for classifying or sending confidential information do not impede workflow: as soon as there is a risk of data being read without authorization or manipulated emails with attachments containing malware landing in the mailbox, the affected users receive a corresponding notification in both Outlook and Outlook on the Web.

Outlook on the Web

Outlook on the Web is the new name for the web-based access to Exchange Server, previously known as "Outlook Web Access" or "Outlook Web App", this has been extensively revised and optimized by Microsoft so that Outlook can also be used without installing the Outlook app on a smartphone or tablet running Android or iOS. The sweep function simplifies the management of emails from a specific sender: for example, these are only kept for a certain number of days, or only the most recent message is saved.

Outlook on the Web can also be used with Google Chrome, Safari and Firefox without major restrictions, instead of Microsoft's Edge and Internet Explorer 11 browsers.

The calendar has received a not only a new look, but also new features, such as email reminders for certain calendar events and the ability to suggest a different time for meeting invitations.

The following details provide various info on the scenarios supported by Exchange Server 2016, as well as the minimum server, hardware and software requirements to ensure optimal operation of the Exchange software.

Changes in the server architecture compared to the previous version

Key changes in Exchange Server 2016 compared to the previous version include:

In order to fully utilize Windows Exchange Server 2016 Enterprise Edition, the hardware, software requirements specified here must be met. For client communication via desktop, the installation of Microsoft Outlook is also a prerequisite. The following minimum specifications apply:

When buying Exchange Server 2016 Enterprise as used software, you can be confident that it is both legal and that this server license offers the same usage possibilities as a corresponding new server license software - not only because software does not wear out, but especially when it comes to general functionality as well as permission to use it. Below you will find all the answers to typical questions about buying used Exchange Server software.

Where does Wiresoft Exchange Server 2016 Enterprise used software come from?

The used Exchange Server 2016 Enterprise software offered by Wiresoft in the software store usually comes from such companies that have previously purchased the software as new and resold it to Wiresoft. Reasons for a sale are often that either surplus or otherwise unused licenses are not needed or the entire software has been replaced by another type or edition and is therefore no longer required. Wiresoft marks all previously deployed or resold licenses as used software, although, as mentioned earlier, they can be used like a new server license.

Is it legal to buy and use Exchange Server 2016 Enterprise as used software?

Yes: The used software offered by Wiresoft comes from the license inventories of companies. The trade as well as the actual use of used software is subject to the usual jurisdiction: both have been declared legal by this jurisdiction - this has also been clearly confirmed again and again by various court decisions.

What other advantages does Wiresoft used software have?

With used software from Wiresoft, companies and organizations can, for example, update or also supplement their existing software inventories at a favorable price, because the price of used software is lower than that of the corresponding new software. Therefore, in the Wiresoft software store you can also find older versions of Exchange Server that are no longer offered as new, which has the advantage that more expensive upgrades can be avoided. Wiresoft used software has the further advantage that it also offers audit security due to the complete verification of all buyers

The Wiresoft used software offer includes not only the Exchange Server 2016 Enterprise Edition, but also the Standard Edition - including the respective required client access licenses as well as newer versions. You can also find great deals on many other Microsoft programs - with all the benefits mentioned above. If you have any questions regarding your Exchange Server 2016 Enterprise licensing, please feel free to contact us via chat, email or phone.