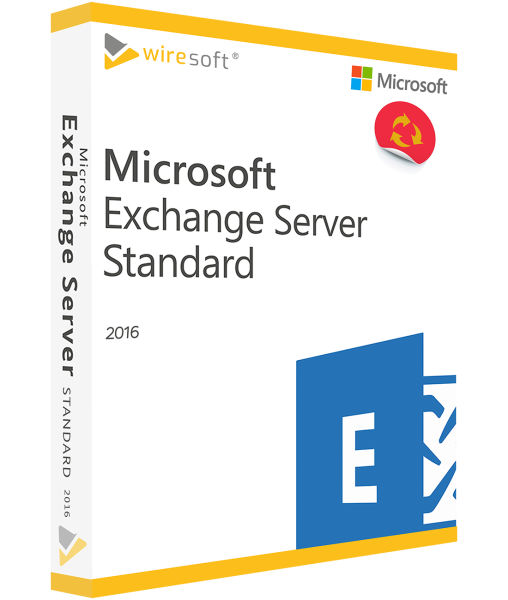 Windows Exchange Server 2016 offers a reliable messaging platform to centrally manage emails and contacts as well as appointments and tasks, this is the server version of Windows 10. Especially small or medium-sized companies and institutions can benefit from many practical features with the Standard Edition, its high scalability as well as the cloud features that support team collaboration in flexible, even locally independent use, without sacrificing security.

The standard edition of Exchange Server 2016 supports up to 5 mailbox databases per server and offers an optimized server architecture by reducing server roles to 2: mailbox and edge transport. The server software is thus an indispensable component in companies for the control and management of work processes and the exchange of information required in the process. The powerful communication system acts as both an internal and external interface, reliably connecting employees and departments across locations and thus making a comprehensive contribution to increasing the efficiency of workflows: Not only can e-mails, contacts, and appointments be centrally managed, clearly archived, and easily searched - the integrated rights management also enables differentiated individual access of employees to data and content; Microsoft Exchange Server 2016 Standard thus has a maximum of control and, at the same time, a high degree of transparency.

At Wiresoft, the Standard Edition of Exchange Server 2016 is available as used software at a lower, reduced price compared to new software - if it is still offered as such at all. Used software is especially attractive for smaller companies and organizations that want to save costs and are looking for an economical way to use powerful software like Exchange 2016 Standard. Because even as used software, Exchange 2016 Standard provides the scalability, performance and security typical of the edition, because it can be used in its entirety.

In addition to enhancements to existing features, the Windows Server 2016 Standard release offers a number of important new features. First is the optimization of the server architecture by reducing the number of server roles to two: mailbox and edge transport - more details below. Also, search scaling has been simplified and cloud services support has been improved. Other features also include:

Exchange Server 2016 Standard now supports hybrid scenarios, where mailboxes can reside on an on-premises server or in the cloud. Local mailboxes can also be used as cloud extensions via Exchange Online archiving and Azure Rights Management.

Outlook on the Web

Known as "Outlook Web Access" or "Outlook Web App" in older versions, the new name for Web-based access to Exchange Server is now "Outlook on the Web." The reason for this is that this feature has been fundamentally revised and optimized by Microsoft: Outlook can now be used without installing the Outlook app on a smartphone or tablet running Android or iOS. The new sweep feature makes it easier to organize emails from a specific sender: optionally, they can be kept only for a certain number of days, or only the most recent message is saved.

Outlook on the Web can also be used with Safari, Firefox or Google Chrome instead of Microsoft's Edge and Internet Explorer 11 browsers without any major restrictions.

Improved collaboration in the cloud via Outlook

In Outlook 2016 or Outlook on the Web, files saved in SharePoint 2016 can now also be inserted in an e-mail as a link, instead of only in the form of an attachment as before. The recipient in question can still open the linked file on his or her PC just like an attachment. The standard protocol for server-to-server authentication is OAuth (Open Authorization). Access rights to files can be customized and automatically activated.

In Exchange Server 2016, the search architecture of eDiscovery has been revised - it works asynchronously as well as decentrally, searching multiple servers simultaneously, which leads to faster results. In Outlook or Outlook on the Web, when a search term is entered, suggestions appear based on the most frequently used emails in the mailbox or contacts, as well as previous searches. In addition, contextual filters for the date range and related senders are also available to make it easier to find information as a result. With Outlook on the Web, it is also possible to search in other people's calendars in addition to your own.

In addition to a new look, the calendar has also received new features, such as email reminders for calendar events and the option to suggest an alternative time for meeting invitations.

The biggest difference between the Standard edition of Exchange Server 2016 and Enterprise is the smaller number of mailbox databases supported, with a maximum of 5.

NOT AVAILABLE in the Standard edition are the Data Loss Prevention (DLP) features, support for an unlimited number of virtual machines or 2 Hyper-V containers, and the Storage Spaces Direct, Storage Replica, Shielded Virtual Machines and OneDrive for Business features.

Below is some info on Exchange Server 2016 supported scenarios, architecture, and minimum hardware and software requirements to ensure optimal operation of Exchange 2016 software.

The main changes in Exchange Server 2016 compared to the previous version are:

To install and use Windows Exchange Server 2016 Standard, the hardware and software requirements listed below must be met. For stationary communication via desktop, the installation of a compatible version of Microsoft Outlook is also required. The following minimum requirements must be met:

With used software like Exchange Server 2016 Standard Edition, you can be confident that both your purchase and your use of the server license are legal, offering the same uses as a corresponding new and unused license - because software generally does not wear out, and the functionality as well as permission to use it are not restricted either. Below you will find the answers to all the typical questions about used Exchange Server software.

Where does Wiresoft used Exchange Server 2016 Standard software come from?

Used software offered in Wiresoft Software Shop, such as Exchange Server 2016 Standard, was purchased by companies that once bought this software new themselves. The most common reasons for selling them are that they are surplus licenses or licenses not used for other reasons, or that the software version has been replaced by another edition or another type and is no longer used. Wiresoft marks all such licenses as used software, even if they can be used like a new server license.

Is the purchase and use of used software legal?

Yes: The used software for Exchange Server 2016 Standard offered by Wiresoft comes from corporate license inventories. The trade with as well as the use of used software is subject to the usual jurisdiction: this has declared both to be legal and this has also been confirmed again and again by various court decisions.

What other advantages does Wiresoft used software have?

Used software from Wiresoft offers both large and small companies a favorable opportunity to supplement or even update existing software inventories, because the price is significantly lower than that of comparable new software. In the Wiresoft software store you will also find older versions of Exchange Server or other software that is no longer offered new, which has the additional advantage that more expensive upgrades can be avoided. Wiresoft used software also has the advantage that it offers audit security through the complete verification of all buyers!

The Wiresoft used software offer includes the Exchange Server 2016 Standard Edition as well as the Enterprise Edition - including the respective required client access licenses - as well as newer program versions. At Wiresoft, you can also find low-priced offers for many other Microsoft programs - e.g. Outlook - with all the above-mentioned benefits. If you have any questions regarding your Exchange Server 2016 Standard licensing, please feel free to contact us via chat, email or phone.