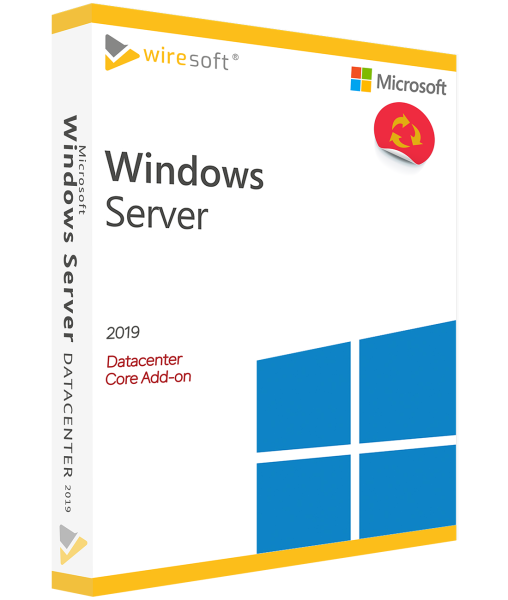 Supplement your Windows Server 2019 Datacenter licensing needs with 2-Core Packages from Wiresoft! The Datacenter Edition of Windows Server 2019 is specifically designed for use in larger, modern data centers: it offers almost unlimited virtualization options and high scalability - including Shielded VMs as well as many hybrid features - and combines reliable performance and additional security layers for comprehensive protection of data and applications in multi-cloud environments.

The Windows Server 2019 Datacenter server operating system enables the secure linking of physical and virtual networks or the provisioning of cloud-based servers and is thus ideally suited to meet the current requirements of modern IT. Based on Windows 10 as the operating system, this edition offers many optimizations for existing functions as well as new, powerful features and services.

Important decision factors for the purchase of the Datacenter Edition of Windows Server 2019 are the features Hyper-V, Software Defined Networking (SDN), Storage Spaces Direct and Storage Replica: together with Shielded Virtual Machines for the operation of an unlimited number of virtual computers, these represent indispensable functions for all companies that need to provide reliable virtualization infrastructures. The Datacenter Edition also includes exclusive features such as:

Windows Server 2019 offers companies a close connection of on-premises environments with the proven Microsoft Azure Services - these provide further hybrid functions as well as additional security layers and support for the change as well as the server migration including data into the cloud with the Storage Migration Service.

Licensing of Windows Server 2019 Datacenter is always core-based, with a minimum number of 16 cores per server. Larger servers can be additionally licensed with 2-core packages. This allows you to expand your licensing needs conveniently and flexibly.

At Wiresoft you can find the Windows Server 2019 Datacenter 2-Core Package as used software - at a significantly lower price than corresponding new software - while it offers all typical Datacenter features regarding functionality, performance and security. Detailed information about the powerful features of Windows Server 2019 Datacenter as well as Microsoft licensing terms with 2-Core Packages is provided in the following overview.

The Windows Server 2019 Dat acenter edition takes virtualization capabilities - as well as data and application security - to a new level: in addition to many enhancements and additions to features already known from the previous version, it has the ability to create software-defined HCI (hyperconverged) infrastructure platforms, which offer many advantages in server and desktop virtualization, because they are not only easier to deploy and manage, but also scale, simplifying the deployment of even complex IT infrastructures.

Basically, Windows Server 2019 Edition Dat acenter offers the maximum virtualization capabilities - which is why it is particularly suitable for those companies where this plays an important role alongside associated higher IT workloads. In Datacenter Edition, the number of virtual machines and Hyper-V containers that can be run is unlimited, with a RAM limit of 24 TB. For this, the following important features are also available with maximum functionality:

Advanced protection in the cloud with Shielded Virtual Machines

Shielded VMs (Virtual Machines) enable the creation of highly secured virtualization infrastructures. Virtual servers are thus secured in such a way that data and applications stored in a public cloud are reliably protected from unauthorized access or use. Existing VMs can also be converted to Shielded VMs and protected Linux VMs can also be created. Shielded VMs can be installed with the Server Manager, in the Windows Admin Center or via PowerShell.

The Software-Defined Networking (SDN) feature in Windows Server 2019 enables centralized configuration of both physical (such as routers, switches and gateways) and virtual network devices and elements (such as Hyper-V virtual switches, Hyper-V network virtualization and RAS gateways) as well as their dynamic management. Existing SDN-compliant devices can be used to achieve greater integration between the physical and virtual networks, as network layers are no longer tied to network devices. In this regard, Windows Server 2019 Datacenter Edition provides the ability to peer and seamlessly connect two networks, as well as firewall monitoring.

With SDN, it is possible to, for example:

Software-Defined Storage (SDS) in Windows Server 2019 decouples storage hardware from storage software. This allows data storage to be managed, scaled and provisioned independently of the underlying storage hardware. It also allows for easy replacement or expansion without changing operations, which also contributes to cost efficiency.

Storage Spaces Direct combines local server data storage into a virtual cluster. Its nodes can connect different physical data carriers or data carrier systems, and communication between them takes place via the SMB protocol. S2D thus offers increased fail-safety, so that even several cluster nodes can fail in the event of a large number without the cluster itself being affected.

In addition to making it easy to deploy and manage software-defined storage (SDS) systems, Storage Spaces Direct also enables the creation of scalable, highly available storage systems, where server storage can be used independently of its hardware and thus more efficiently.

Other new features of Windows Server 2019

In addition to these exclusive features of Windows Server 2019 Datacenter Edition, the following key features are also available to enterprises:

Supported by a machine learning model, the predictive analytics feature System Insights is available in Windows Server 2019. This provides insights into the operation of locally deployed servers by analyzing their performance indicators and events to make accurate predictions that can help reduce the effort required to reactive administer Windows Server instances, thereby helping to reduce operational costs.

In Windows Server 2019, Kubernetes and Linux are now better supported: Linux and Windows containers managed with Kubernetes can now be used in parallel as a result. New functions such as container networking are also available for Kubernetes, and individual images have also been improved here.

Higher protection of data and network with Azure Services

Reliable protection not only of data, but also of network infrastructures, is becoming increasingly important in companies. Windows Server 2019 offers powerful functions such as Windows Defender Advanced Threat Protection (ATP) with Exploit Guard and Domain Controller.

Here, the hybrid features available in Windows Server 2019 enable improved protection of on-premises Active Directory as well as easier use of Microsoft Azure services - so that closer collaboration between Windows Server and Azure services enables easy synchronization of data or data backup, among others with:

This connects an on-premises server to an Azure virtual network in the Azure cloud. The Storage Migration Assistant also facilitates server migration, including data, to the cloud, where Azure File Sync can act as the storage location.

When licensing servers with Windows Server 2019 Datacenter, the Microsoft licensing regulations must also be observed for used software, which uses the number of cores as a benchmark for the calculation. The following provisions apply:

Microsoft server software such as Windows Server 2019 Datacenter is always initially licensed based on physical hardware. In addition to the number of physical core processors, the number of virtual servers is also counted. A server license always covers two physical processor cores. The Microsoft licensing regulations are based on a minimum number of 8 cores per processor - regardless of whether the existing hardware has fewer than 8 cores. In addition, a minimum of 2 processors per physical server = 16 cores is applied.

If a Windows Server in a company has a higher number of cores than 16, then these can also be flexibly licensed with 2-core packages for Windows Server 2019 Datacenter.

In a Hyper-V environment, all processors are licensed that correspond to the physical processor cores. Specifically, the Windows Server Datacenter edition entitles execution of an unlimited number of Hyper-V instances. The prerequisite for this is, as already stated, that all corresponding processor cores of the server have already been licensed.

No license is required for Linux instances in the Datacenter Edition.

In addition to the Windows Server license, all clients - users and end devices - that access Windows Server 2019 must also be equipped with a client access license (CAL). User and Device CALs are also available from Wiresoft at low prices used.

A 2-core package for Windows Server 2019 Datacenter offered by Wiresoft as used software does not differ in terms of usability from a corresponding new, unused server license - not only because software generally does not wear out. Nevertheless, there are often other questions about used Windows Server licenses - these are answered below.

Where does used software like Windows Server 2019 Datacenter 2-Core come from?

Windows Server 2019 Datacenter software offered by Wiresoft as used, such as the 2-Core Package, comes from organizations or companies that have usually purchased it themselves as new, possibly used it, and later sold it to Wiresoft. After the sale to Wiresoft or with the offer in the store, this is therefore called used software or used software, but it can be used like a new license.

Yes: You can trust Wiresoft that for you as a customer, both the purchase of a used software such as Windows Server 2019 Datacenter 2-Core, as well as the actual, official use by yourself does not violate any valid laws, because the usual jurisdiction allows not only the trade of Microsoft used software, but also its use, if the software comes from the license inventory of a company. Various court rulings on this matter have clearly confirmed this fact again and again.

Yes: Used software such as the offered Windows Server 2019 Datacenter 2-Core Package offers you as a Wiresoft customer the same advantages as comparable new server software: You have the usual buyer security through immediate download after purchase and can activate your server license immediately with the included valid license key.

Does Used Software like Windows Server 2019 Datacenter 2-Core have any other advantages?

Used software offers Wiresoft customers above all a great economic advantage, because they can update their software inventories much more cheaply than with new goods, and thus keep them conveniently up to date. Thus, used software from Wiresoft can contribute to the reduction of operating costs, because it also offers audit security due to the complete proof of all buyers!