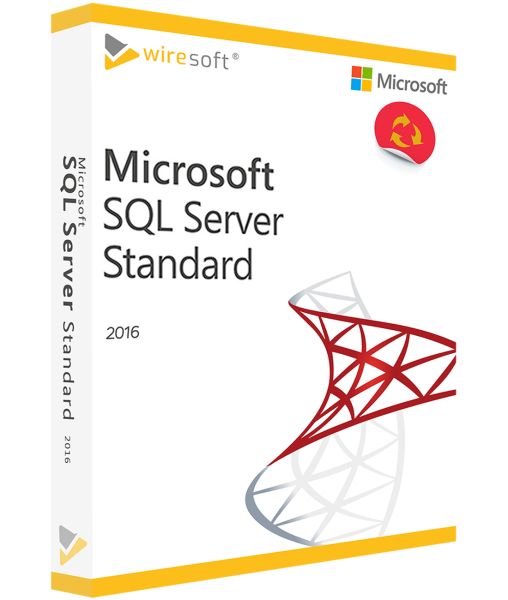 SQL Server 2016 Standard provides enterprises with a reliable, scalable, hybrid database platform to build intelligent, mission-critical applications, as this edition includes all the features needed to do so, as well as the corresponding memory performance, including advanced security with new features, as well as in-database query capabilities and analytics, plus Hadoop and cloud integration, R-analysis, and more.

In-memory performance, advanced analytics functions as well as real-time analysis of operational data plus the expanded reporting area are also among the features particularly worth mentioning.

Also worth mentioning are support for JavaScript Object Notation (JSON), as well as PolyBase for Transact-SQL queries and new Hybrid Cloud scenarios, which provide companies with even more sophisticated data analysis for more detailed results that can be displayed on many end devices thanks to comprehensive visualization options.

The SQL Server 2016 Standard edition is available from Wiresoft as used software - the price is lower than that of comparable new software - as far as this version of SQL Server is still regularly offered at all. This SQL Server license can be used to its full extent even when used and thus offers the maximum scalability, performance and security typical of the edition; this makes it particularly attractive for companies or organizations of smaller size that use correspondingly smaller servers, so that the combination of server license and CALs represents the most economical solution for them. The licensing of this used Microsoft SQL Server 2016 Standard Edition is carried out according to the official Microsoft license management conditions. For detailed information on the new enhancements and features included in SQL Server 2016 Standard and how to license them correctly, please see the following sections.

Microsoft SQL Server 2016 Standard Edition supports the transformation of business-critical applications into intelligent applications, as well as increased scalability for up to 24 cores, plus open source R integration also enables advanced analytics. Employees or endpoints that have the appropriate client access license will benefit from the comprehensive business intelligence and development tools, which are also available for cloud-based use. Below is a brief outline of the key new features and functionality in SQL Server version 2016:

The built-in in-memory capabilities are responsible for a significant performance boost across all workloads - which is comparable to the speed of in-memory OLTP. In addition, there are other features such as:

SQL Server 2016 Analysis Services offers improved performance and functionality for, among other things, creation, filtering, processing for table model databases - including integration with the R statistical language: R scripts can thus be executed directly on SQL Server and no longer have to be exported from the SQL database and then imported into R for an analysis, which not only saves time, but also provides greater security - as well as:

Important features here are support for Always On availability groups as well as Always Encrypted and Hadoop File System (HDFS) - as well as:

Master Data Services are used to efficiently manage master data sets within an organization. The following options, among others, are available:

When it comes to security features, Microsoft SQL Server version 2016 has the following improvements to offer, among others:

Maximum scalability/sizes per instance of the SQL Server database engine

For SQL Server 2019 Standard Edition, combined licensing of server and complementary client access licenses (CALs) is available for either users or endpoints, so these must be purchased separately. Microsoft's licensing metric makes the following statements in this regard:

Licensing with the Server/CAL variant is particularly suitable for those companies that require client access licenses for a relatively manageable number of users or end devices, so that the costs for SQL Server licensing are lower than for the alternative Core-based licensing.

If you have any questions about your optimal SQL Server 2016 Standard licensing, simply contact us.

Good to know: With used software from Wiresoft, such as the license for SQL Server 2016 Standard, you can be sure that it does not differ in capabilities from a comparable new server license - not only because software generally does not wear out, but also in terms of its legal usability and functionality. Below you will find all the answers to typical questions about used software for SQL Server licenses.

Where does Wiresoft used software for SQL Server 2016 Standard come from?

The used software for SQL Server 2016 Standard offered by Wiresoft in the respective available editions comes from various organizations or companies that once purchased the software themselves and resold it to Wiresoft for various reasons - for example, because it contains surplus licenses or was replaced by another software and was no longer used. These licenses are therefore marked as used software and can be used like a new license.

Yes: Every Wiresoft used software - such as for SQL Server 2016 Standard License - offers you customers the same advantages with the purchase as a comparable new server software: both with buyer security through immediate download after the purchase process is completed as well as with immediate license activation through the supplied valid license key.

Is it legal to buy and use SQL Server 2016 Standard with used software?

Yes: When purchasing Wiresoft Used Software, you can be sure that you are acting legally as a customer - of course, this also applies to its actual use and also to Wiresoft as a provider - because the Used Software offered comes from the license inventory of a company. Therefore, the usual jurisdiction applies, which not only allows trading with Microsoft Used Software, but also its actual use; various court rulings have already confirmed this several times.

Are there other advantages with Wiresoft pre-owned software?

Yes: With Wiresoft used software, customers can supplement or update their software inventories at a particularly favorable price, because its price is significantly lower than that of comparable new software. Wiresoft also offers many older versions of server licenses that are no longer regularly available, so customers are not forced to make more expensive upgrades. Used software from Wiresoft also has the advantage of being audit-proof due to the complete record of all buyers!

In Wiresoft's used software portfolio, you will not only find SQL Server software such as the 2016 Standard Edition at a favorable advantage price, but also the alternative core licensing as well as other versions of SQL Server. In Wiresoft's used software portfolio you will also find many offers for other Microsoft programs - with all the benefits mentioned above. If you have any questions regarding your licensing of SQL Server 2016 Standard incl. CALs or any other licensing option, please feel free to contact us via chat, email or phone.