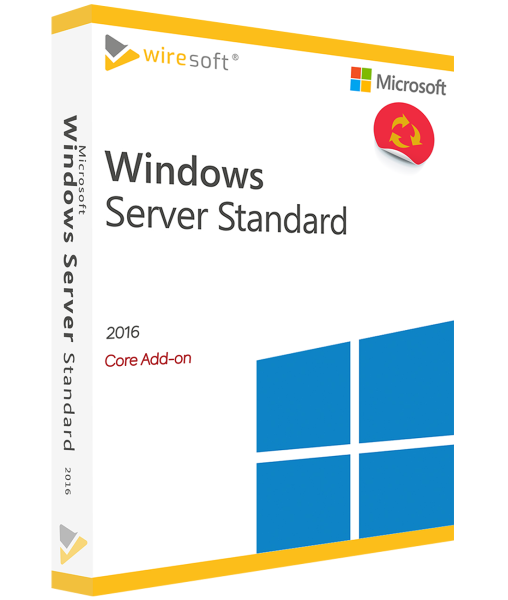 Windows Server 2016 Standard is designed for the virtualization needs and IT of smaller businesses and is the server version of Windows 10. With a 2-core package, existing server licensing can be flexibly expanded.

With Windows Server 2016 Standard, companies get a reliable, cloud-ready server operating system that is designed for those environments that only run virtualization of applications to a small degree and that primarily use physical servers. Compared to its predecessor, this Standard Edition also offers many new features and enhancements designed to support the move to a cloud-based environment - and ensure infrastructure security through increased stability and improved protection against network and storage failures. Windows Server 2016 Standard is virtually intuitive to use, thanks to its familiar interface from Windows 10.

When deciding to purchase the Standard edition of Windows Server 2016, the need for virtualization of applications in a company is the main factor. Standard already provides many functions here to develop and operate hyper-convergent infrastructures in a smaller company. They are supplemented by Microsoft Azure Services, which enable the closer connection of local environments with the cloud with further practical functions.

In this regard, Windows Server 2016 Standard not only offers sufficient prerequisites to create virtual networks, but also to be used for managing IT infrastructures in a data center; also for this purpose, the security of data has been further strengthened through various optimizations.

Licensing of the standard Windows Server 2016 edition with used software

Starting with the Windows Server 2016 version, licensing of the Standard Edition is exclusively core-based: A minimum number of 16 cores is always specified for each server; additional cores can be licensed with the 2-Core Packages - more details below.

Wiresoft offers the 2-Core Package of Windows Server 2016 Standard as used software. This has above all the great advantage of a lower price compared to new - with the same range of functions, e.g. in virtualization, as well as the same performance - in addition, this version is usually no longer offered new. Detailed information on the feature set of Microsoft Windows Server 2016 Standard Edition as well as the exact licensing terms is provided in the following overview.

First of all, Windows Server 2016 Standard is generally characterized by a higher performance when running applications as well as a stronger connection to the cloud compared to the predecessor version. In addition, there are new functions here in particular, which both support the switch to a cloud environment and create the prerequisites for virtualizing servers and applications.

With the Standard Edition, it is therefore possible to create complex virtual networks to a certain extent, which have greater stability, combined with better protection of the infrastructures.

When using Windows Server 2016 Standard as a data center for efficient management of an IT infrastructure in a smaller company, this edition includes, among other things, new server roles as well as more options for assigning user rights; in addition, the improved protection in the event of a network or storage failure ensures greater security and faster recovery.

Windows Server 2016 Standard can also be started in the simpler Core application - by not displaying the graphical desktop interface, the performance of older hardware in particular can be significantly improved when running the server software.

Important features available in the Standard version, which mainly concern the possibilities for virtualizing applications, are presented in more detail below.

The standard edition of Windows Server 2016 includes virtualization rights for 2 virtual machines or 2 Hyper-V containers, with a maximum of 24 TB RAM available for this. For two additional VM rights, all existing physical active cores must be licensed again.

Hyper-V offers various storage features, such as the iSCSI initiator for the use of the SCSI protocol over an IP network, as well as the support of Storage Spaces to combine drives into a logical storage pool, which then provides storage spaces (Storage Spaces Direct is not available in the standard edition), as well as multipath I/O (MPIO) for better load distribution between the connections and higher failover and load balancing. Last but not least, VM Storage Resiliency improves the availability of Windows Server 2016 Hyper-V clusters by increasing tolerance to storage system failures.

New in Microsoft Windows Server 2016 is support for Windows Server Containers as well as Hyper-V containers based on Docker, the open source software for easily deploying server and cloud applications in isolation using container virtualization, which also simplifies their deployment. With Docker, all the components needed for this are made available via the container host.

Complementing this is Nano Server, a remotely managed server operating system that is optimized for Windows Server containers or the Docker extension and can be configured to host Docker containers. Nano Server allows the creation of much leaner servers, as the use of a virtual engine saves up to 90% of an organization's storage space. Nano Server can also be used not only to create Hyper-V clusters, but also for classic server services, such as file servers.

In Windows Server 2016 version, the connection between the operating system and the Microsoft Azure cloud service is pushed even further. Distributed data centers can thus be linked together even more efficiently and reliably to form high-performance, high-availability servers and clusters, because Azure offers the special advantage of an end-to-end hybrid infrastructure - with uniform functions for identities, security and administration for all components, as well as Cloud Witness, the high-availability feature for failover clusters, and RDS Connection Broker for the provision of virtual desktops.

Server applications available with Windows Server 2016 Standard that can be installed via Server Manager (or PowerShell) include:

Further, the following components are supported, among others:

In contrast, the following features and components are NOT supported in the Standard Edition of Windows Server 2016:

To ensure trouble-free operation of Windows Server 2016 Standard, the hardware used must meet the minimum requirements listed below. Other requirements depend on the system configuration or any other installed applications.

Microsoft licensing requirements must also be met when licensing a server with Windows Server 2016 Standard Edition as used software. At least one 2-core package is required for extended licensing, and the following rules apply.

With the release of the Windows Server 2016 version, Microsoft has also fundamentally changed its licensing model. When licensing a server with the standard or a higher edition, the number of cores of the physical hardware used forms the basis here. The following provisions apply:

With a used 2-core package of Windows Server 2016 Standard, server cores can be licensed in the same way as with a new 2-core package - although the latter is hardly ever offered new. In general, software cannot wear out anyway, so Used Software from Wiresoft offers the same functionalities and also rights as an unused server license. Frequently asked questions about features of used Windows server licenses are answered below.

Yes: As a Wiresoft customer you can trust that not only your purchase of this Windows Server 2016 Standard 2-Core Package as well as its regular use does not violate any valid laws. By the valid jurisdiction both the trade with Microsoft used software is permitted, as well as its use, because with Wiresoft this comes from the license stock of a company. Various court rulings have clearly confirmed this time and again.

Where does the used software for a Windows Server 2016 Standard 2-Core Package come from?

2-Core Packages for Windows Server 2016 Standard at Wiresoft consequently originate from companies or organizations; these have usually purchased it new themselves and also usually actually used it, and then sold it to Wiresoft. Reasons for this can be, for example, the company-wide use of a newer software version or the use of server hardware with fewer cores. Such 2-core packages are always offered as used software in the Wiresoft Shop, even if they can be used like a new license.

What about the buyer safety of used software of Windows Server 2016 Standard?

This Windows Server 2016 Standard 2-Core Package as well as any other Wiresoft Used Software offers you the usual buyer safety by the immediate download of the software package after completed payment process as well as the immediate license activation with a license key valid for it - just like new software.

Does Used Software from Wiresoft have any other advantages?

Yes: Wiresoft customers benefit first of all from the significantly lower price when purchasing used software; thus, it offers an economic advantage, since companies as well as individuals can supplement or update their software inventory more economically than with new software. Used software from Wiresoft can therefore help to reduce operating costs, because it also offers audit security due to the complete record of all buyers!