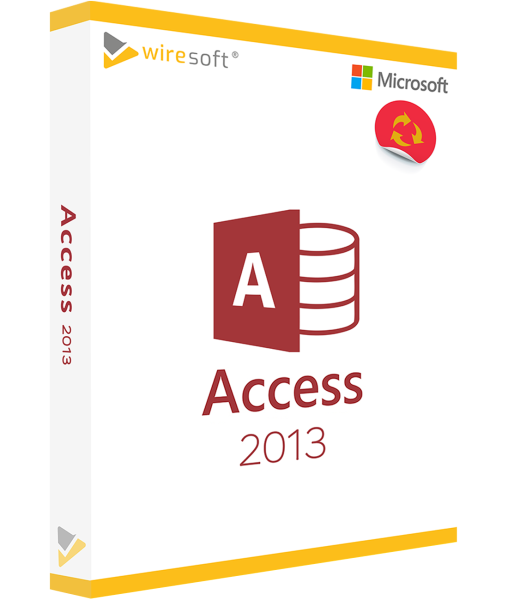 Microsoft Access 2013 is yet another version of the powerful Microsoft database management system to capture data in a structured form and make it available for various types of further use. Access 2013 offers suitable interfaces that not only allow the import of Excel and PDF files, but also from many types of SQL databases. Intuitive tools allow even inexperienced users to quickly get started with the software and create different types of database applications according to their individual needs - especially for goods management in companies as well as data administration and project management, but also for private purposes. Access 2013 is therefore ideally suited for small to medium-sized databases with up to 10 users.

For this purpose, Access provides users with numerous integrated templates and layouts with which typical applications can be created quickly and easily on the basis of the desktop interface familiar from Office 2013. In addition, the software offers extensive reporting functions for professional evaluation of the status quo and other reports.

Via Office 365 or a SharePoint connection, Access 2013 also offers all the prerequisites for simplified team collaboration. Users who already use Windows 8 as their operating system can also take advantage of the optimized touch functionality and use the software to its full extent on corresponding end devices.

However, the most important new feature of Access 2013 is the Access Web App! Once created, this type of database can be published via SharePoint so that all employees with access rights can access it and work with it in real time.

Access 2013 is usually only available as a permanent part of the MS Office editions Professional and Professional Plus (or by subscription). By purchasing the single version of Access 2013 from Wiresoft, not only the users of other Office 2013 editions, but also users who do not have Office version installed, have the opportunity to use this software on their PC. Access 2013 offers in particular the advantage that the program is still supported by older Microsoft operating systems from Windows 7 - thus benefiting especially those users who do not want to switch to the current operating system.

In Wiresoft's online shop you can buy the 2013 version of MS Access as well as other versions of the software including the very latest edition at a reasonable price as a single user license - as well as the other Office programs. The following overview provides an introduction to the most important functions and features in Access 2013.

By integrating the Microsoft Jet Engine as a database system, Access provides all the tools of an integrated development environment, which, thanks to its graphical user interface, is ideally suited for creating typical database applications. For this purpose, Access 2013 provides users with many visual programming objects that are already geared towards database access; this makes it possible to efficiently and quickly create suitable applications without having to have a great deal of programming knowledge.

As a Relational Database Management System (RDBMS), Access 2013 offers the decisive advantage over comparable database systems that the data collected via it can be used flexibly, so that users have the possibility to update it at any time and thus also to change, add to or even delete it again. This transaction-oriented design makes MS Access 2013 ideal for managing business-relevant data and supporting operational systems in companies; typical tasks include not only the capture and provision of projects and task lists, but also of contact databases and, especially in shop systems, the tracking and management of inventory.

Access 2013 supports the SQL-92 database query language, and Access uses both the older .mdb and the newer .accdb format (short for Microsoft Access Database) as its Standard data format, which can also be opened by programs outside Microsoft. When linking to an external data source, other Access versions as well as non-Access formats can be used.

With Access 2013, various forms and object types of databases can be created or used - including:

Especially the forms that can be created individually in Access 2013 are an extremely practical feature for entering and managing data not only manually, but also automatically via interfaces. Thus, individual data records can be displayed in the form view in a structured and clearly arranged manner, which makes input and maintenance much easier. Various so-called form layout tools are available for creating these Access AutoForms as required.

The most important innovation that Access 2013 has to offer, however, are the apps! With the integrated tools, users can create different apps even without programming knowledge. To do this, the appropriate data type must first be selected, so Access automatically creates a complete database structure for this, which already has a user-friendly interface. In addition to typical basic functions, the app already contains various Standard commands for adding or editing data, as well as for navigating.

Controls can be placed or moved to a specific position as needed without having to make extra changes to the layout. This feature works intuitively, so users simply click and drag an element to the desired location, and other controls that are there are automatically moved aside to create the appropriate space.

Access web applications can be made accessible online via a web browser by connecting them to Microsoft SharePoint as a SharePoint app, which allows them to be shared with other users. This means that databases created in Access can not only be used locally on a PC, but can also be used regardless of location via an available web connection.

The other advantages of making Access apps available via SharePoint are, on the one hand, the possibility of obtaining information about the use of the respective app itself, as well as being able to trace back such information that was generated via it.

Connecting Access 2013 to Microsoft SQL Server and Azure SQL Database also provides increased reliability and security, as well as scalability of data - when deployed in the cloud as well as on-premises.

The Access 2013 Office program is offered by Microsoft in the following versions: 32-bit and 64-bit. The 32-bit version of Access 2013 is supported on Windows operating systems Windows 7, Windows 8, and Windows 8.1.

MS Access 2013 is a classic, fixed component of the MS Office editions Professional and Professional Pro and therefore not available as a purchase version individually, but only with one of these Office packages or in a paid subscription. In the Wiresoft online shop you can buy the Access 2013 program individually - without the other subscription option with possibly obligatory updates; i.e. you incur only these one-time costs with this purchase. This is a full version of the program, which has the same range of functions as the Office 2013 software component, with the only difference that it is a single license of Access 2013, which is used exclusively by you.

Secure software purchase with Wiresoft: Buying Access 2013 from Wiresoft is not only particularly inexpensive, but also secure: This Access 2013 single-user license offered originally comes from a larger volume license, such as is otherwise only used in a larger company. These companies are legally entitled to sell unneeded software licenses to Wiresoft, for example - either because they are not needed and are surplus, or because this program version has been replaced by a newer one or is no longer supported due to a change in hardware or operating system. In this case, these are removed from the volume license and converted into individual licenses and then referred to as used software. However, their general functionality is not affected by this, as the software itself cannot wear out. Wiresoft also only sells full versions of Access and other Microsoft programs that are identical to the original Microsoft versions and come from safe and legal sources.

When buying used software with Wiresoft, you do not take any legal risk, as the sale as well as the purchase of used software is protected by law.

After your purchase and download, the Access 2013 software you purchased can be immediately installed on your PC and activated with a valid volume license key - also called a Multi-Activation Key (MAK) - and used without restriction.

Buying software with Wiresoft is a particularly economical solution for using otherwise expensive or individually unavailable programs, from which not only freelancers and SMEs, but also private users benefit. This way, they get all the benefits Access 2013 has to offer at a low price, and save money too!