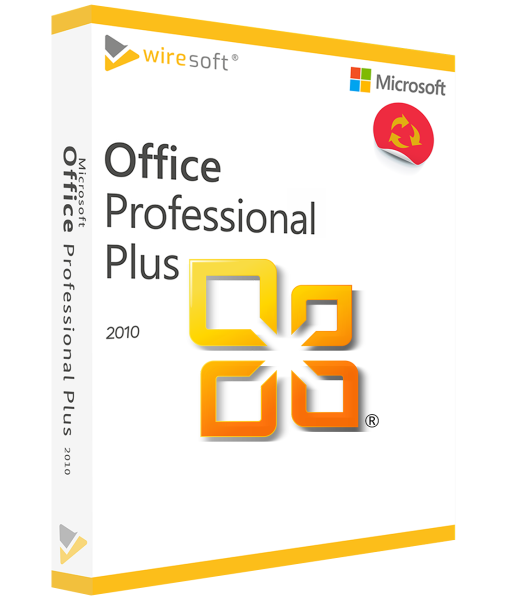 With the MS Office-Edition 2010 Professional Plus business professionals have all Microsoft programs bundled in one package, because the portfolio contains all the programs and functions they need to work in all areas of business: starting with the creation of texts for different addressees with Word 2010 and the analysis of complex data in Excel 2010, through communication with employees and business partners as well as task planning with Outlook 2010, including the design of presentations and reports with PowerPoint 2010 and the note-taking and sharing of ideas with OneNote 2010, to versatile publications of print and online media with Publisher 2010 - plus: Access 2010 for extensive database applications and InfoPath 2010 for creating forms for any application purpose - all combined in Office 2010 Professional Plus, whose desktop interface also features a modernized look and feel, with programs that are even more intuitive to use.

The Office Edition 2010 Professional Plus is now regularly available only as a volume license, as used only by larger companies with many workstations. Wiresoft, however, offers the edition as used software also as a single license, so that single users can also buy Professional Plus 2010 and use all included programs.

The purchase of a 2010 edition of MS Office has for many buyers the great advantage that this is still supported by the Microsoft operating system Windows 7, which is still frequently used, so that this compatibility is quite a purchase-deciding feature. In the Wiresoft Onlineshop you receive beside the purchase version of Office 2010 Professional Plus also other editions of this version as well as further Office- packages. The following overview provides a presentation of the individual programs including their innovations from Office 2010 Professional Plus.

In addition to the proven Office programs Word, Excel, PowerPoint and Outlook, Professional Plus 2016 includes not only the digital notebook OneNote and the DTP program Microsoft Publisher, but also Access 2010 and InfoPath. Especially the latter applications are indispensable for commercial applications.

Overview of all programs of the MS Office Edition 2010 Professional Plus:

The classic software for word processing has, in addition to many proven features and functions in the 2010 version again some new to offer to create documents and letters in formatting for almost any application:

The classic calculation software offers everything for analyzing and filtering data from particularly large tables - and in this version also new functions and tools:

PowerPoint can be used to create informative presentations for almost any target group. The application supports users with practical functions and templates, without much experience can be professionally designed slides with text, graphics, images and videos. New in PowerPoint 2010:

The popular e-mail client also complements in the Office version 2010 the functions for sending mails as well as for managing contacts, appointments and projects with additional features for comprehensive communication in every area:

OneNote is the electronic notebook - but offer a better overview compared to the small notebooks and books. Via the cloud, the notes stored in it can also be used for collaboration with colleagues and are thus available anywhere and at any time. OneNote also convinces with these new features:

The desktop publishing software is designed to create high-quality publications that are both print-ready and professional for online use.

Microsoft Access is a comprehensive database solution for professionals as well as beginners to optimally structure large amounts of data and make it available for various applications. The powerful program offers a wide range of tools, modular components and templates to design databases for individual applications immediately:

InfoPath is a versatile business tool for creating custom forms that accelerate and standardize the collection and organization of information. Businesses, IT departments, and developers can use the built-in standard components and flexible controls to design forms for business applications, time tracking, surveys, and more, and make them available in a common location.

Office 2010 Professional Plus is available at download in two versions: 32-bit and 64-bit. Depending on the currently used operating system, one of the two versions is recommended. By default, the 32-bit version PC is installed to avoid compatibility problems of the 64-bit version with older computers or operating systems. The 64-bit version has 4 GB of memory, which is advantageous when working with Excel files of at least 2 GB in size. The new ribbon interface also requires more space on the hard disk compared to the previous version. In general, the following minimum requirements apply:

As already mentioned, the 2010 Professional Plus Edition from Microsoft is not available in conventional trade as a single license, it is or was only offered as a volume license for companies. In the Wiresoft online shop you can buy the Office 2010 Professional Plus software as a single user license, and without any further subscription obligations; therefore, when buying from Wiresoft, you will only incur costs once when purchasing the full version of the program, which offers the identical scope of programs as the original Office volume license.

The reason: The available single user license of Office 2010 Professional Plus Edition was previously part of a volume license used by a company. With the purchase of a volume license, this includes the right to resell surplus software licenses or the entire volume license - regardless of whether parts or all of the entire volume license were used. Upon sale, this is broken up and converted into individual licenses and then referred to as used software. The division has no effect on the functionality of the Office 2010 Professional Plus Edition or the scope of the included programs.

Always buy software safely from Wiresoft: MS Office 2010 Professional Plus is not only available in the Wiresoft Shop at a particularly low price - your purchase is also convenient through the instant download and at the same time safe: because Wiresoft only sells such versions of Office Professional Plus or of other Office editions or versions that are identical to the respective original Microsoft products; moreover, these come from legal sources from companies based in Europe. You can install the Office 2010 Professional Plus software on your PC immediately after successfully completing the purchase process and downloading - it is activated with the included volume license key, which is valid for your single license.

The purchase of this Office 2010 Professional Plus Edition as used software in the Wiresoft Software Shop does not represent any legal risk for you, because the trade with used software is legally permitted, which was also confirmed by numerous judgements.

Buying used software from Wiresoft is an affordable way for customers to use Office editions such as Professional Plus 2010. Our customers therefore include the self-employed as well as private individuals and SMEs, who all benefit from our inexpensive software offer!

In the Wiresoft Software-Shop you will find beside the Office-Edition 2010 Professional Plus also other versions as well as other Microsoft programs as low-priced purchase version for download. If you have any questions about this or any other Microsoft Office software, simply use our competent advice by e-mail, telephone or chat.

Reviews 1
Read, write and discuss reviews...more
Close menu
Customer reviews for "MICROSOFT OFFICE 2010 PROFESSIONAL PLUS"
By: Martin Am: 9 May 2019